IN THE PROBATECOURT OF MILLER COUNTYSTATE OFGEORGIAIN RE: ESTATEOFJOHNNY FRANKFRITH, ESTATENO. 20-2408DECEASEDPETITION FORLETTERS OFADMINISTRATION NOTICE To whom it may concern: Margaret Jean Arnold has petitioned for to be appointed Administrator(s) of the estate of Johnny Frank Frith deceased, of said County. ( The Petitioner has also applied for waiver of bond and/or grant of certain powers contained in O.C.G.A. § […] 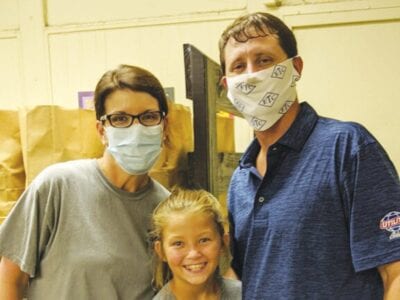 Food Bank is a Family Affair in July

The Food Bank at Colquitt United Methodist Church was a family affair in July. The packing team on Thursday included the Mock family, Ashley, Valarie, and Addison. Three generations were also represented with grandmother, Lisa Kelley, working along side her daughter, Danielle, and granddaughter, Sabella. Kent Richardson and his daughter, Joanna, whom came from Hahira on Saturday to volunteer at […]

The girl of his dreams

A young man called his mother and announced excitedly that he had just met the woman of his dreams. Now what should he do? His mother had an idea: “Why don’t you send her flowers, and on the card invite her to your apartment for a home-cooked meal?” He thought this was a great strategy, and a week later, the […]

As part of Miller County School’s reopening plan, the system is seeking applications of interest from parents to declare their interest in a full-time, distance learning model. Parents interested in declaring the full-time distance learning model need to understand that there is a semester-long commitment. Interest applications for students in grades K-12 must be declared by 5:00 p.m. on Monday, […]